The Alive Playground is a simple -both elegant and readable- intervention by Brígida  Campbell in a children’s playground in Pendleton, Salford. The work was created in collaboration with IUD, and local school children who played happily and noisily in their break time whilst Brigida made sound recordings.

IUD have been working with this playground for several years. The no-playground as we call it nestles in a small well in the beautiful but overlooked 1960’s pedestrianized landscape. It is located at the intersection between several pathways, which lead diagonally in one direction to Salford Shopping City and in the other to the former Clarendon Recreation Centre (currently nameless) and vertically on either side of the ground to public transport and main roads. To the south of the playground is the forlorn, pigeon infested 5 aside football court and the charred pillars of what remains of two basket ball courts. To the north and east are the footprints of 3 demolished tower blocks and on the western side 50 yards away is a row of houses and behind that a small section of currently inhabited housing estate, where a security camera masquerading unconvincingly as a street lamp has the playground in its scope.

When we photographed the playground in 2009 it was freshly painted and surfaced with designs rendered in brightly coloured rubber. If my memory is correct at this stage there were no blue painted railings, but they were there by the time we found the gates padlocked in 2013. Before too long, the park was welded permanently shut, the swings removed from their frames and other equipment rendered unusable or absent altogether. We returned periodically. In 2015 we photographed the site from above with a drone. From the air we could make out the floor designs a butterfly, a caterpillar and several spaceships, tainted with dirt and moss spores. In 2016 we passed the playground whilst on a walk with a group of secondary school children and their teachers. We asked each child to tie a message to the railings, which expressed their hopes for future play in Pendleton. All through 2014, 2015 the playground remained welded shut and it looks like it will see out 2016 like this too. 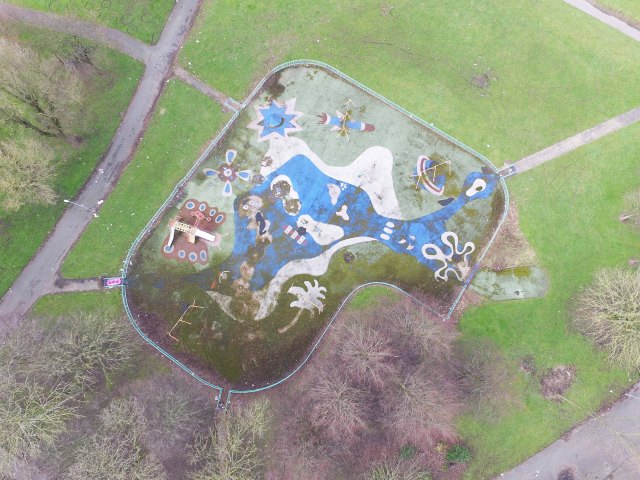 The no-playground has helped us to understand that thinking about childhood (whilst acknowledging it as a complex social construct) obliges us to read the development of a housing estate as temporally fraught, as a matter of conflict. It is a simple but potent idea that reveals the violent biopolitics of development. Here is the outline of a playground, colourful metal, familiar forms of swings and slides. But then we discover that the playground isn’t usable. A small child runs towards the familiar form. He holds one rusty railing in each hand, peering through them. He is wailing to his mother: “I want to go on the slide! I want to go on the slide!”. The playground is for the child, a thing he still wants desperately, but it isn’t available for the child. It is a trick, an overwhelming disappointment and a nuisance for the mother who has to negotiate this impossible attraction. She has to explain to the child that the playground isn’t for him, it is broken and dangerous.

Of course the altercation between child and developer never occurs in person. The time of the child is at odds with the time of the developer and these bodies occupy different time zones. The child is impatient for space, to breath air, to spin, slide, glide, to consume the elements and be consumed by them. The developer moves through abstract space such as the pale, featureless areas on plans where everything other than the prospect of future profit has been erased. The lengthy processes of ruination, cleansing and valorization determine the future of the playground, not the weekends, holidays, energies and growth spurts that make up the needs we attribute to the child. We consider what the playground means, what it communicates to the child about herself, what it says about her value. How does the developer and indeed the offices of local governance speak to her through the playground about who she is? How does she feel as the subject of what Gary Bratchford refers to as the “paradoxical optics of non-recognition and surveillance”.*

The Alive Playground was a simple action devised by Brígida  Campbell to transform the playground for one hour by replacing the sound of no-play with the sound of children playing. The idea came from not a single place but a nexus of perceived and perhaps concealed connections. Studying for her PhD in Barcelona, Brígida was occasionally distracted by the sounds of play beneath her window. In 2015 Brigida already created an installation in a children’s playground in her home town of Belo Horizonte, Brazil. In this work she wanted to speak critically about the changes in the universe of children’s dreams, and by replacing everyday images from childhood she hoped the work would allude to a dream world, which is increasingly permeated by consumer desires and fear. So for Brígida the idea of a playground as a site was already established when she walked around Pendleton with IUD for our Promising Home research. The Alive Playground transformed the space into a thing brimming full with sound, thereby making visible the lack of bodies, accentuating the loss experienced when play is not there. We would also like to hear the children’s voices as future echoes, reminding us that the faint, tainted, utopian residues of the public housing estate may still be invoked.

* from a forthcoming article based on a walk around Pendleton to be published by IUD in All Materials of Value, 12th January 2017.

Respond to The Alive Playground